Relentless MMA's aproach to Self Defense

At Relentless MMA Self Defense is one of our TOP concerns.  The gym was founded on the principal being able to protect oneself from a bigger, stronger, and even faster opponent/attacker.  All of our techniques in ALL of our classes are aimed toward that end. 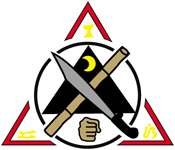 In our Muay Thai class we work being able to throw punches, kicks, knees and elbows, while at the same time being able to defend the same.  In our Free Style Brazilian Jiu-Jitsu, and Submission Wrestling classes we focus on how to perform throws, sweeps, takedowns, "GET HOME SAFELY." that's it, we believe once someone tries to stop you from going home to your family and loved ones then they are a threat.  We teach everyone to first try to "Verbally Deescalate" or talk your way out, after that, walk away, if those two methods don't work then.... Well then they shouldn't have tried to stop you from going home.  If you use a Muay Thai kick with a Judo foot sweep to get home then thats fine.  If you just start screaming at a attacker and throw things at them till they leave you alone that's fine.  If you have to poke someone in the eye and run a mile, climb a fence, and break a car window to set off a alarm to get home safely then that's fine too. We also understand things some martial arts or fighting systems don't is that "Situation Dictates Response", sometimes the situation is you might be carrying groceries so you can't do a series of punches and kicks, the situation might be, you're 40-60 years old and can't do a head kick, or as some styles suggest kick a weapon out of someones hand.  We try to stick to simple principals, using our minds, abilities, and environment to give us the highest chance of success in everything we do.  When it comes to self defense we want our students to be empowered with knowledge and skills that at some point may save their life if they do find themselves in a horrible situation but if they don't we want them to feel comfortable, and confident in a variety of situations, along with the knowledge to know when trouble is coming. 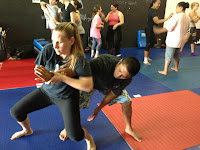 tackles, and various submission ranging from chokes, arm and leg locks, while at the same time focusing on defending each move too.  With our Self Defense class we strive to take it to the next level by adding in weapon defense whether it be, from guns, knives, baseball bats, or multiple opponents.  With this as our focus we pull heavily from two INCREDIBLE systems for their practical self defense.  The first being Kali or Arnis, or Escrima depending on where you're from.  It's a Filipino based system that focuses on weapons training first and foremost and guerrilla war tactics.  Unlike most martial arts or fighting systems that start people learning basic punches, kicks, and grabs, Kali focuses on weapons FIRST.  Instead of training for years unarmed, and then using a weapon, the system was developed using either a knife, or a stick, or double knives, or double sticks, or a stick and a knife day one so that the students would immediately  be able to defend themselves and their families.  At the time these methods were developed multiple attackers who were also larger, stronger, and better armed was standard as they were when the Philippines were invaded by the Spanish, French and Dutch who all had armor, rifles, and much better swords versus the native Filipino's who had inferor steel for their swords but a NEED to protect themselves and their families.  The second system we borrow heavily from is Jun Fan Gung Fu / Jeet Kune Do Concepts as created by Bruce Lee.  What many don't know is that Bruce Lee was a avid boxer as a child along with getting in many street fights that drove him into traditional martial arts like Tai Chi, and eventually into Wing Chun, which was developed by a Chinese nun as a means of self defense.  Blending the best aka the most practical Asian martial arts with, modern boxing, wrestling, and any thing else he could find that 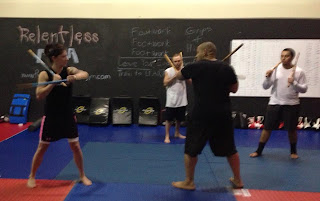 work he created his system of Jun Fan Gung Fu which literally translates into "My Hard Work" (Jun Fan was Bruce Lee's Chineese first name, and gung fu and kung fu literally means "hard work".  After working with some of the best Martial Artsit and fighters of his time Bruce Lee found his own system of Jun Fan Gung Fu to restrictive and started Jeet Kune Do, which adopted the simple principal of use what works, because what works is all that really matters in a fight.  As with most styles there was preprogrammed response to a attack, with Jeet Kune Do it was simply about winning.  If someone has to pull a gun or knife to get someone to leave them alone then that was fine, if someone has to kick someone in the groin that was fine, if someone has to use mace and then hit someone with a car then that is fine.  From that Relentless MMA has adopted one 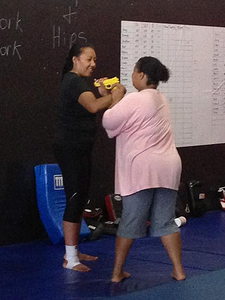 single rule to self defense that everything we teach must fall under.

We accomplish this by training in blunt and edge weapons offensively and defensively along with working with Firearm defense and with regular field trips to the shooting range for those interested to learn more about firearms.  We believe in order to stop a thing we must first understand it.  Many styles have come up over the past few years boasting weapons defense but have not taken the time work with people who have worked in live fire situations.  Because of this the instructors at Relentless MMA have spent time training with various   military personal from the basic to the special forces level to bring the the BEST, most KNOWLEDGEABLE, and HIGHEST QUALITY instruction we possibly can.  We are RELENTLESS in our pursuit of better training methods.  Ways to improve ourselves, and our students.  Our goal with our self defense class is not to just make you feel safe but to make sure if anything bad might happen you have the ABSOLUTE BEST information and training on how to "Get Home Safely". 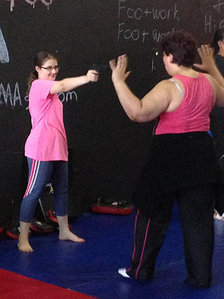 We know many people train in "Self Defense" styles don't see the benefit of learning sport fighting like Boxing, Muay Thai, Brazilian Jiu-Jitsu, Submission Wrestling, Judo, and Mixed Martial Arts but all of these styles have merits that bring out faster reaction times, better hand eye (and even foot eye) coordination, along with being GREAT forms of stress release and teach people how to react under real stress, not just someone trying to grab you like a 1950's robot going at 0.2 miles per hour as many martial arts and self defense schools practice their "self defense" techniques.  We focus on keeping things as realistic as possible   When we train we try to make it "Alive" doing unrehearsed movements, weapons, stress, sounds, and distractions that you might find in real life to make your training the best it can be.

Posted by Relentless MMA & Fitness at 9:47 AM